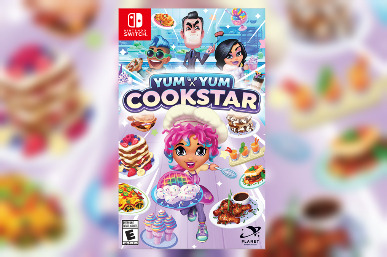 While Cooking Mama has made her way to Switch, there’s no doubt fans of that style of game who are looking for more. That’s where Yum Yum Cookstar comes into play, and it’s set for Oct. 4th, 2022 release on Switch.

Yum Yum Cookstar is a new cooking game experience from the creators of Cooking Mama: Cookstar. In this new game, players will stir, fry, chop and bake their way through 70+ recipes in an energetic new competition hosted by Chef Yum Yum. A fan of unicorn food as well as culinary artist, Chef Yum Yum introduces colorful and creative dishes with vegetarian variants including Rainbow Waffles, Unicorn Smoothies, Sushi Burritos and French Toast Cake.

Yum Yum Cookstar allows you to play with traditional button controls, motion controls, or even the touchscreen when in portable mode. There’s even rhythm-based mini-games backed by an exciting soundtrack by award winning composer Nile Rodgers. All in all, it sounds like Yum Yum Cookstar could end up being the perfect thing for Cooking Mama fans to give a go!