Priced at one hundred and Octo dollars 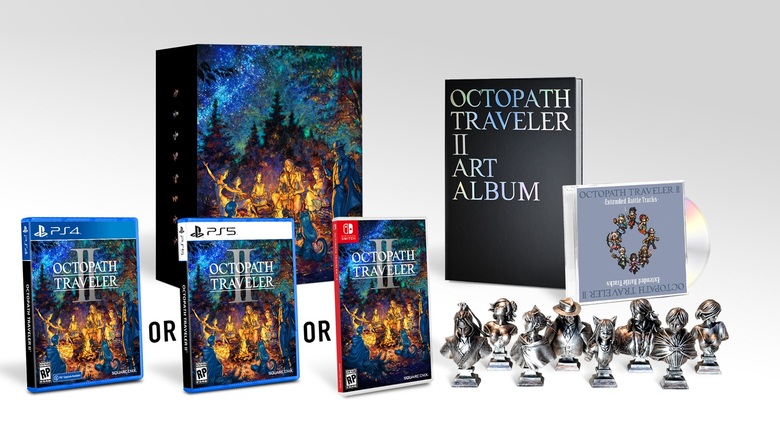 Octopath Traveler II may have just been revealed a few hours ago, but that hasn’t stopped Square Enix from jumping right on the reveal of a Collector’s Edition for the game. You can actually pre-order the package right now, and it’s priced at a whopping $180.

As you can see in the image above, this Collector’s Edition packs in some fancy goodies. Here’s a complete breakdown of everything included (along with a copy of the game).

This art book features a collection of package art, world maps, and illustrations depicting eight travelers and their Crossed Path. The pages are specially bound to open flat at 180 degrees, making it very easy to view and appreciate the full-size spreads. The cover has a smooth matte finish with foil stamping giving the book a luxurious feel. ※Size: B5 (182 x 257 mm) / Hard Cover Album Bound / 44 pages

A set of bust figures depicting the eight travelers, the protagonists of the title. The striking expressions in their respective gazes foreshadow each of their journeys about to begin. Also the background inside the figure package features a map of the Solistia continent. When displaying this map as a backdrop for the figures, it feels the epic world of OCTOPATH TRAVELER II unfolds right in front of you. Of course, these stylish figures can be displayed on their own as well. Approximate Figure Size: W 32 mm x D 24.6 mm x H 76 mm

If this sounds like a deal you can’t pass up, you can lock in your pre-order here.