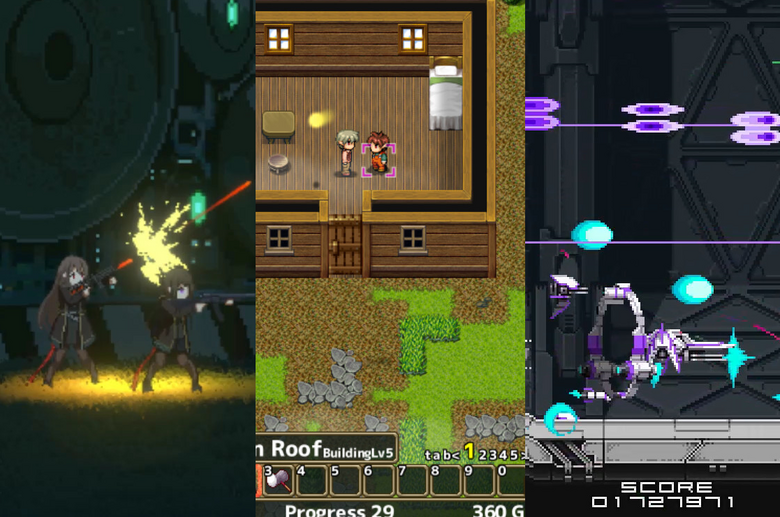 PLAYISM held a TGS 2022 preview, and it included a trio of reveals for the Switch. We now know that Drago Noka, Marfusha and DRAINUS are all heading to the Switch, and you can get details on each title below.

Drago Noka is brought to you by GeSEI unkan, the indie game developers behind Wandering. They used the game construction tool WOLF RPG Editor to bring this masterpiece to life. Create an entire village to your liking atop a gigantic dragon in this city-building game Drago Noka.

Recruit and settle in new villagers with unique skills and personalities. Befriend them, work together, and build together. Enrich one another’s lives and who knows…you may even start a family of your own!

Live a busy but carefree life

Take on many different jobs like farming, blacksmithing, fishing, sewing, cooking, synthesizing, and raising farm animals! Create the village you desire while taking care of your villagers’ needs.

Prepare for battle with other dragons

As peaceful as village life is, one must be prepared for the fight ahead as your dragon is not the only dragon in this world…The Fire Dragon, Wind Dragon, Ice Dragon and more also roam the land. Their very existence affects your village in various ways. One day, you might need to fight them head-on, so be prepared!

Marfusha is a high-tempo shooting game with simple controls. Become a guard of a dystopian world and defend the border gates from the enemies. Upgrade your character by buying cards with your heavily-taxed salary to face increasingly powerful enemies.

DRAINUS is a side-scrolling shooting game in which the player takes control of the “Drainus”, a ship that can absorb energy bullets, to take down the countless enemy ships zipping through space. Energy absorbed can be used to enhance the ship’s functions, such as adding new weapons.

The Planet Halpax is located in the far reaches of space, suffering from the oppressive rule of the Kharlal Empire. One of the slaves residing there is battling an illness. He must return home to the faraway planet of Earth to be cured of the disease, known as “Planetary Compatibility Disorder”.His daughter, also a slave, is both devastated by her father’s illness and helpless to do anything about it.

At that moment, a humanoid named Ghenie, who looks strangely like a frog, appears and says, “I have come from 50 years in the future. A galactic war is about to break out, in which more than 5000 planets will be annihilated by the Kharlal Empire. I have come to this time period to stop that war and the oppressive rule of the Kharlal Empire. I need your help.”

Why me? What can I do? Irina had no idea what was going on, but her father’s illness was worsening by the minute. With no time to hesitate and nowhere else to turn, she takes Gehnie’s green hand and sets off…

Now she has begun her journey into a universe filled with the armies of the Kharlal Empire, and her quest to reach her distant home planet while taking the Empire down once and for all.

The “Reflector”, which absorbs enemy shots, is the most distinguishing feature of this game.When activated, it absorbs enemy attacks for a certain period of time. Counterattacks can then be launched in accordance with the amount of attacks absorbed.

The absorbed energy is also stored in tanks. That energy can be used to enhance the various functions of your ship.

Irina: Determined to save her father, Irina steals the Drainus - the Kharlal Empire’s most cutting-edge fighter ship - and heads for a faraway planet.

Gehnie: A humanoid soldier who has traveled back in time from the future in order to destroy the Kharlal Empire and prevent a devastating galactic war.