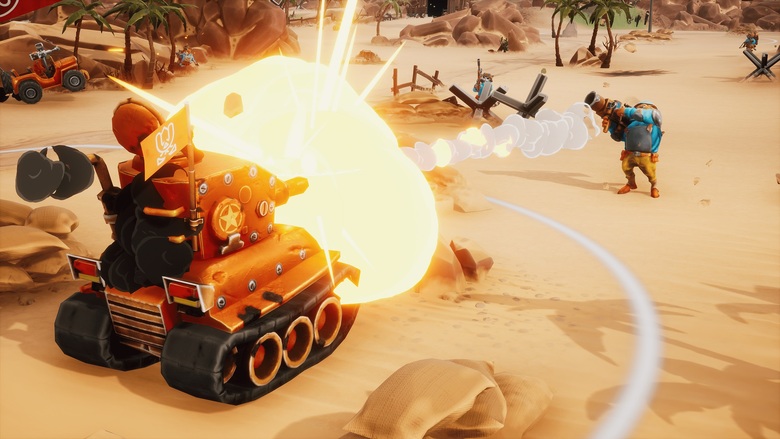 A new tactical RPG called Warpaws is coming to Nintendo Switch in Quarter 1 of 2023. In it, you control armies of cats and dogs as they battle for supremacy, you can read the full press release down below.

Warpaws, the real-time strategy game where dogs and cats duke it out in a lighthearted alternate world using WWII-inspired armaments, developed by Slipgate Ironworks and 2B Games and published by Fulqrum Publishing, lets fur fly on PlayStation 5, Xbox Series XǀS, Nintendo Switch, and PC in Q1 2023.

Time to answer the age-old question: what’s better, cats or dogs? Warpaws invites us to find out in all-out war through the lens of classic, cartoon-inspired art with slapstick. Command canine corps or feline forces and utilize superior planning and strategic abilities to capture key control points from enemy units to dominate the map.

Unleash strategic carnage with 16 different units in five battle-torn biomes. Deploy spies for stealthy showdowns, send bazooka-wielding soldiers to dominate skirmishes on sand dunes, or assemble a mix of gunners, engineers, and fiery pyros suited for any engagement. Each unit stands on its own; instead of replacing them with direct upgrades, all characters have their own specialties.

Battle through a single-player campaign or compete against other players in a variety of multiplayer modes. Call upon a trusted ally and take down AI forces in a co-op mode, duke it out in online versus mode matches, or become the King of the Hill champion. Master each map — Desert, Polar, Lava, City, Islands — and take advantage of terrain. Destroy frozen lakes to drown platoons, lead opponents into snowstorms, or even trick them into swimming with sharks.

“As big fans of the Bitmap Brothers’ Z, we always loved the idea of making our own strategy game that focused more on engagement than resources,” said Daniel Mortensen, Game Director, Slipgate Ironworks. “Warpaws is our chance to make good on that dream, and we hope you enjoy playing it as much as we enjoyed creating it.”