Is Miyamoto Pushing For Pikmin to Take Over the World?

A new bloom for the series? 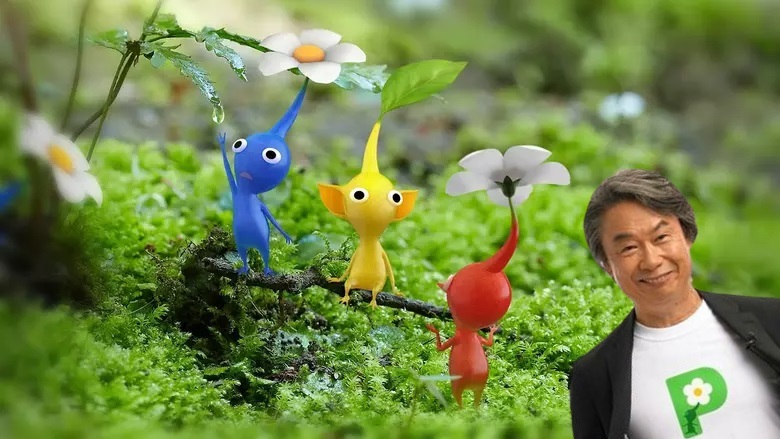 In the most recent Nintendo Direct, Pikmin 4 was finally announced after Miyamoto promised the game was near completion 7 years ago. This was arguably the biggest announcement for most fans (including myself) and many were quick to notice the…odd way Miyamoto chose to reveal it.

If you need a refresher, Miyamoto starts his segment discussing his work on the Super Mario Movie and Universal Studios Hollywood’s Super Nintendo World. This, of course, made fans think we would be getting news on both of them, but Miyamoto then quickly pivoted to Pikmin, and in particular, the mobile game Pikmin Bloom.

It was certainly deflating in the moment; Miyamoto mentions he’ll be discussing the Pikmin series, making viewers think we’ll finally be seeing Pikmin 4, but instead he spends several minutes discussing a mobile game that has been out for a few months already. Of course, he then revealed Pikmin 4 to the joy of many fans, but after the dust settled on the announcement, those fans were left wondering why it was announced in such a way.

Now that I’ve had time to contemplate this series of events, I have a feeling that Miyamoto might be pushing for Pikmin to become a major franchise for Nintendo, even outside of gaming. That might seem to be a heavy assumption to make from just one Direct, but if we look at Miyamoto’s recent endeavors within Nintendo, I believe signs point to something big happening for Pikmin. 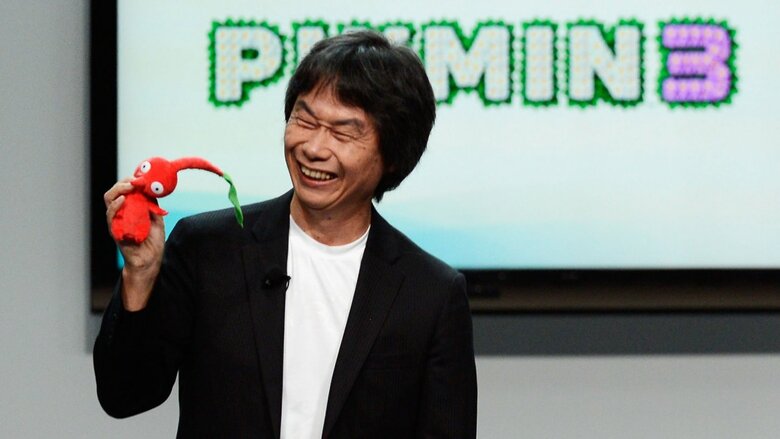 Miyamoto is a figure who needs no introduction for Nintendo fans; the creative fellow behind Donkey Kong, Super Mario, The Legend of Zelda, Star fox, F-Zero, and our focus, Pikmin. However, despite his fathering of many of these franchises, he doesn’t really seem to be involved with them like he used to be.

Mario, Zelda, and Donkey Kong are in the hands of Yoshiaki Koizumi, Eiji Aonuma, and Retro Studios respectively, and as for Star Fox and F-Zero well… let’s not talk about them! The Pikmin series is the only franchise that Miyamoto seems to be actively involved in the production of, but why is this?

While we don’t have concrete evidence for why this is the case, my personal belief is that Miyamoto really believes in Pikmin. He was even once quoted as saying “The next Mario is Pikmin” before the original game came out.

Obviously, the Pikmin series has never been that financially successful for a number of factors. The series’ first two entries were released on the GameCube, a console which underperformed for Nintendo. Another factor is that people just didn’t get Pikmin. As someone who’s a big fan of the series, I firmly believe that it’s an I.P. that wins people over from being played rather than watching trailers.

This is all to say Pikmin is a series that Miyamoto seems to really believe in, and possibly feels that Nintendo’s audience hasn’t given it a fair shake yet. That’s why he’s always so involved with the development of each game and is the one who shows up in Directs/press conferences to push the series. I feel like Miyamoto is now almost stubbornly determined to make Pikmin a big thing and he may be using resources outside of Nintendo to do it.

Pikmin as a Multimedia Franchise 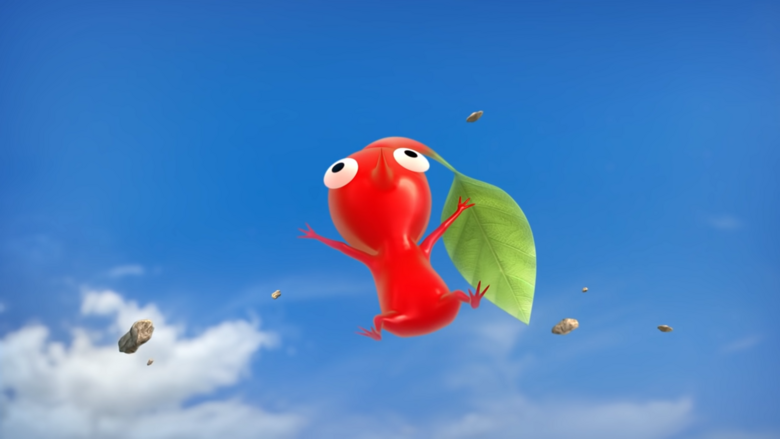 We’re in a new age for Nintendo. The Switch’s massive success has cemented their brand in the public consciousness harder than ever before, and they are definitely keen to capitalize on that.

If you told me in the Wii U era that Nintendo would be heavily involved with the production of a theme park for Universal Studios and a fully animated Mario movie, I would have just shrugged and said, “That would be nice,” but here we are.

Nintendo wants their brands and characters out in the public eye, and I think Pikmin has the potential to be a franchise with mass appeal even outside of games. To add to that, I think Miyamoto feels the same way.

Speaking of Super Nintendo World, isn’t it odd that Pikmin is the only non-Mario related franchise present in the land? If you’re not aware, the Pikmin have been sneakily hidden around Super Nintendo World similar to the hidden Mickeys seen at the Disney theme parks. 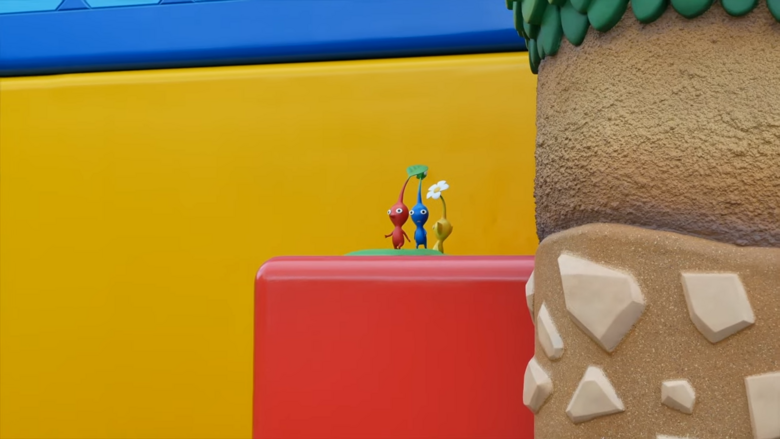 You can see them wandering around the land... 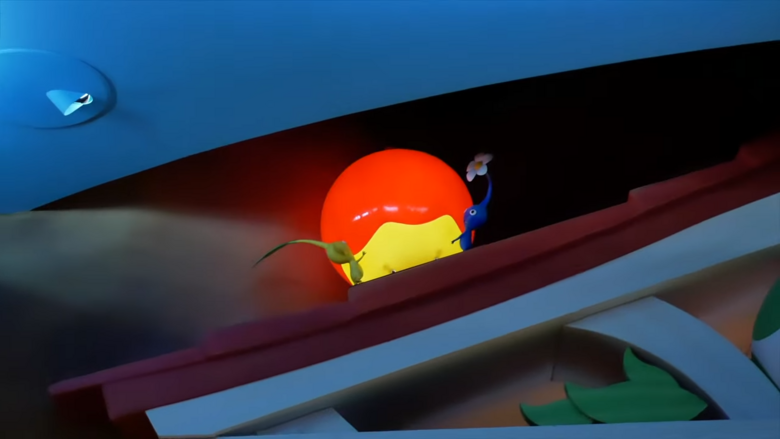 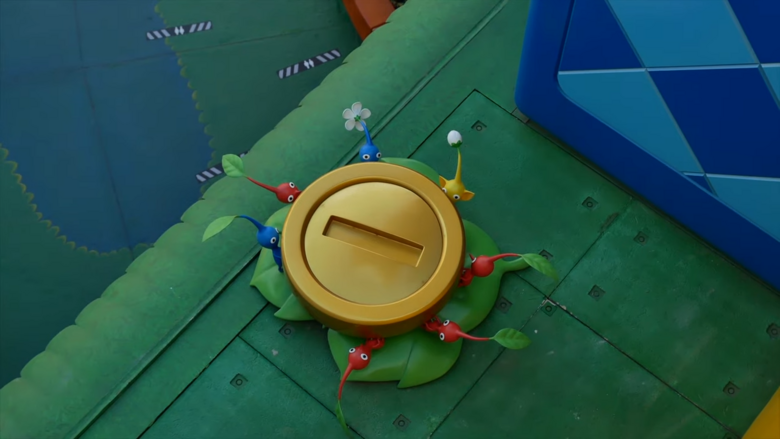 ...and even collecting coins!
View All

I fully believe this was a push from Miyamoto, as he was deeply involved with the production of this park, as well as the upcoming Mario movie (more on that later). Obviously, this possibly points to Pikmin not receiving a full land in the future Nintendo expansions of Universal parks, but the fact that they gained a presence before Zelda, Pokémon and Splatoon must mean something.

I think Miyamoto wants Pikmin to be known not just as videogame characters, but characters in general, which is why he’s comfortable with them hanging around and doing cute things in the Mario world. 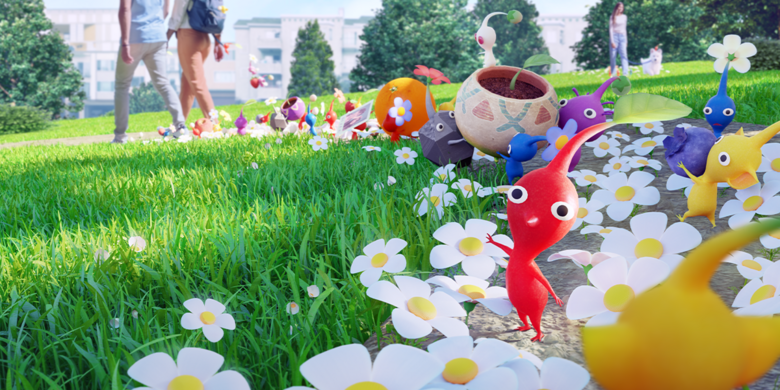 Speaking of cute things, another big push for the Pikmin I.P. was in the release of Pikmin Bloom for mobile devices. Developed by Niantic of Pokémon GO fame, Pikmin Bloom offers a more relaxed take on the A.R. adventures provided by the former.

Instead of walking around to catch Pokémon and battle in gyms, the goal of Pikmin bloom is to beautify your area with daily walks. You can also collect Pikmin wearing cute outfits themed after the areas in which you find them.

You’ll notice that aside from the basic mechanics of plucking the Pikmin and giving them nectar for flowers, there isn’t much of the standard Pikmin game structure present in Pikmin Bloom. There are no monsters, no treasures, and no time limits, it’s a game with the goal of getting the player outside and active.

This is a game that sells Pikmin as characters rather than a game series. You don’t need to be a fan to play, as the charm of the characters pulls you in. It’s particularly interesting when compared to Nintendo’s other mobile offerings, which were more condensed or reworked takes on the franchise that the game belongs to. I feel these decisions were deliberate, with the goal of making the general audience fans of Pikmin as characters, rather than the series itself.

This could also explain why Miyamoto was highlighting Pikmin Bloom in the latest Direct. His goal was to remind people that the game is out and to show how you don’t really need to be a fan of the series to play.

I think another way Pikmin can be built up as beloved characters outside of their games is through the world of animation. 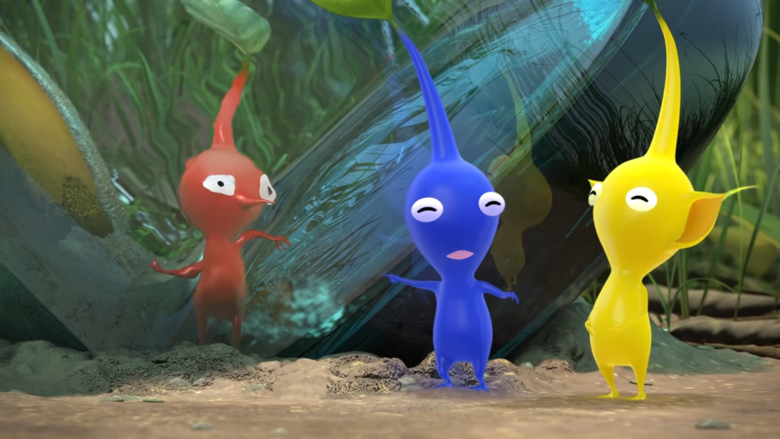 If you don’t remember, Miyamoto had helped produce three Pikmin Animated shorts back in 2014 entitled Pikmin Short Movies. These shorts depicted the Pikmin going about their days on PNF-404 and the hi-jinks that ensued. Miyamoto himself actually used Flipnote Studio on the 3DS to sketch out storyboards for the shorts, and you can check one out below.

Clearly, Miyamoto was heavily involved with this project. He could have chosen any of his franchises to make shorts for, but he chose Pikmin. Why is that, you ask? According to this article from IGN, Miyamoto believed that Pikmin had the most potential for stories like this.

Miyamoto was drawn to the idea of using Pikmin in short films because of their approachable simplicity and it’s relatively new IP, opposed to games like Mario and Zelda having such a long, rich heritage and in Zelda’s case, narrative arcs. The Pikmin have more of potential in different situations…

The IGN article also had another interesting tidbit to share on Pikmin as far as their potential as characters in general.

the universal appeal and playful nature of characters like Pikmin, replicate characters such as the minions or the aliens from Toy Story.

This is undoubtedly true, as even though Pikmin came before things like Minions, the two franchises share a lot in common. A small size, similar-but-varied appearances, and reliance on physical acting can be attributed to both Pikmin and Minions, and all those factors came together to make Minions huge icons. There’s no reason why the same couldn’t happen for Pikmin if given the chance.

This is why it’s rather interesting that the studio Nintendo partnered with to produce the upcoming Mario movie is the Minions’ creator, Illumination. I can’t help but wonder if the success of the Minions is what drove Nintendo to choose this studio among others, hoping that their future cinematic efforts could reach Minions-like heights.

All this leads to a rather fun theory that I’d like to put forward. I believe a Pikmin short will precede the upcoming Mario movie, similar to how Pixar and Disney have shorts before their animated features.

The recent acquisition of Dynamo Pictures, Miyamoto’s involvement with the film, and the latest push of Pikmin content leads me to believe that a short could be showcased before the film. It could either be one of the pre-existing shorts or a brand new one made for theaters, but I think it makes perfect sense. Again, that’s just my own speculation…and hope, as it just makes too much sense.

If this theory does come true, it could potentially lead to the largest exposure the Pikmin series has gotten…ever! If this does happen, I can only hope that the charm of the existing shorts will spark an interest in the series for the kids who go see Mario’s film. If you’ve not seen these shorts before I highly recommend you give them a watch. Even if you’re not that familiar with the series, they do a good job of being simple enough that anyone can understand, much in the approach of a classic cartoon. I’ll link one below, but the rest are all available on Nintendo’s YouTube Channels, so they aren’t hard to find.

After everything I’ve laid out here, I’m confident that Miyamoto is pushing for Pikmin to be a big Nintendo franchise. Even if the games’ sales never reach the lofty heights of Nintendo’s big names, the series could appeal to the masses through other media streams.

I’ll fully admit this may all just be wishful thinking from someone who considers Pikmin one of, if not his favorite Nintendo franchise, but I truly think there’s something to all this! I believe so many people would love Pikmin if they just gave it a chance, and introducing the franchise to the world through more accessible means may just be the key to Pikmin’s big break.

If you’ve somehow managed to read this whole thing without even being a fan of the series, I humbly request you give Pikmin a shot. Pikmin 3 Deluxe has a demo on the eShop, and again I firmly believe the Pikmin franchise needs to be played to truly understand. Heck, even if you don’t want to play the demo, at least consider watching a let’s play or editorial videos about the series.

What can I say? I just really love Pikmin and am somewhat concerned that Miyamoto is the last person in Nintendo championing it. While I’m hopeful for the series’ future, I can’t help but be concerned that if this latest push doesn’t click, the series may become one of Nintendo’s many dormant brands, and I would hate to see that happen.

So, like Miyamoto, I’m just gonna plant this seed now and hope something grows from it.