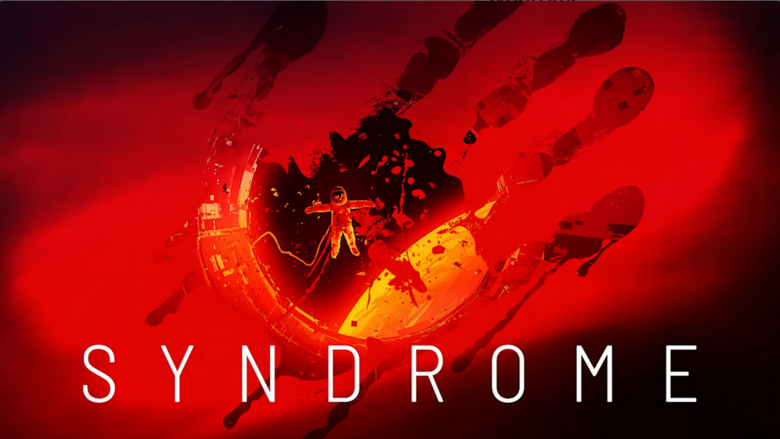 Syndrome, in a similar vein to Alien Isolation, is a horror game set in space. You’re stuck on a spaceship and are being hunted by terrifying enemies that you have no chance of escaping. You have some fairly simple goals to achieve, such as gaining access to new areas of the ship or acquiring a new tool to let you explore unreachable areas, and all the while there could be a threat around any corner. Syndrome could have been up there with other great space-horror games, but some tedious game design, clunky controls, game-breaking visuals, and progression bugs keep it from reaching any heights it could have achieved. 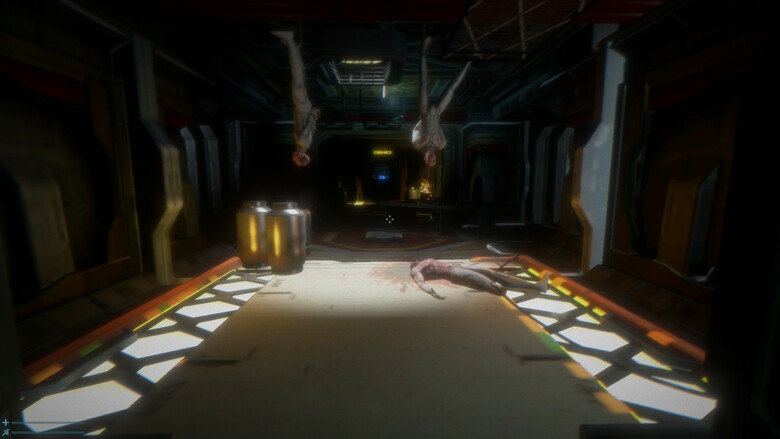 Like most horror games, Syndrome starts off with just enough information to understand where and who you are, with a general feeling that something is not right. The game explains your situation through radio contact with your character’s superior, who gives you a fair amount of detail to get you hooked on the plot, but not enough to fully understand what has happened. For a good period after this, you have very little contact with anyone else, which creates a great sense of isolation on the ship.

The ship really is the standout part of Syndrome, as its design manages to shine through the issues I experienced. While there is nothing groundbreaking with its design, the ship captures the atmosphere and design of what you would expect from a massive space station. Long, claustrophobic corridors filled with steam vents and wiring give off a nice industrial vibe, while still feeling right at home in space. The technology used aboard the ship also strikes a nice balance between far future sci-fi and grounded realism to make the space feel believable. 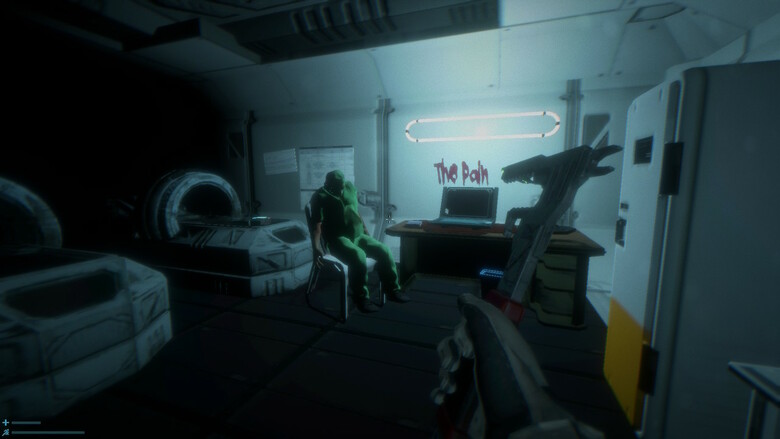 A common scene among the rooms on the ship. 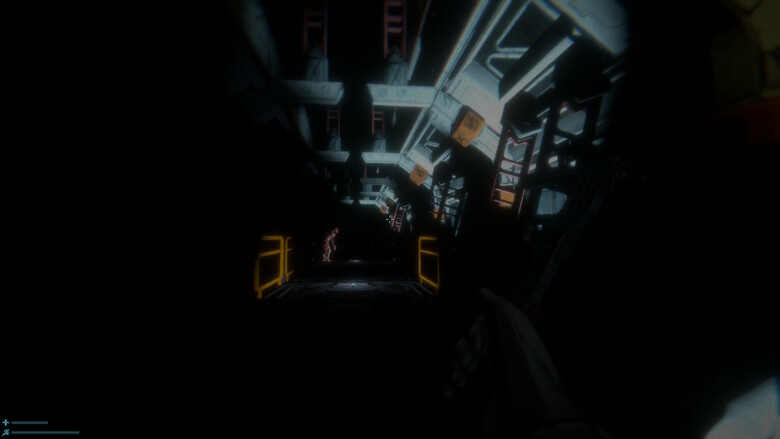 I really hate to say it, but that’s all the good I can say about Syndrome, as everything else is so unpolished and buggy that I literally could not finish the game. This isn’t to say that I gave up or didn’t try, as I truly did. The game is full of missing and low-quality textures, some so low that you cannot read vital in-game information. There are also frequent frame dips, which again didn’t stop me from playing, but made the journey less pleasant. It was after I acquired the second tool in the game, a hacking device that’s needed to proceed with the story, I simply couldn’t make it work after completing the tutorial. I reloaded my save countless times and tried different methods of using the device, but nothing I did made a difference.

Even if I hadn’t encountered this bug and could finish the game, I don’t think my enjoyment would have been much greater. There’s just too much in the way of unpolished content, and it bogs down the rest of the game to a great degree. First off, every collectible item in the game lacks texture. Initially, I thought this was intentional, as the first items you encounter are notes from former crewmates aboard the ship. It wasn’t until I started encountering other items that I suspected something was wrong. Item variety increases later in the game, with health-boosting food and tools to take advantage of. These items also lacked texture, just as the earlier items did. Once I looked at gameplay for Syndrome on other systems, I officially confirmed this to be an issue, and not a design choice.

Seeing the non-Switch gameplay really was an eye-opener to just how bad the rest of the game looked on the Switch. Certainly playable, but nothing that looked particularly pleasing. When I first started up the game, I thought the aesthetic was intentional, and the game was going for a retro-vibe. Seeing comparisons to other platforms confirmed I was mistaken. Along with the aforementioned texture issues, there are also problems with lighting and particle effects. This actually leads to gameplay hiccups, as there are steam vents that damage you when they release steam, and they’re incredibly hard to notice on Switch. Some graphical downgrades can be forgiven and are usually common when dealing with Switch ports, but not when they impact gameplay. Furthermore, we usually see graphical elements cut back in order to make for a smoother gameplay experience, but Syndrome still experiences numerous instances of long lag spikes. 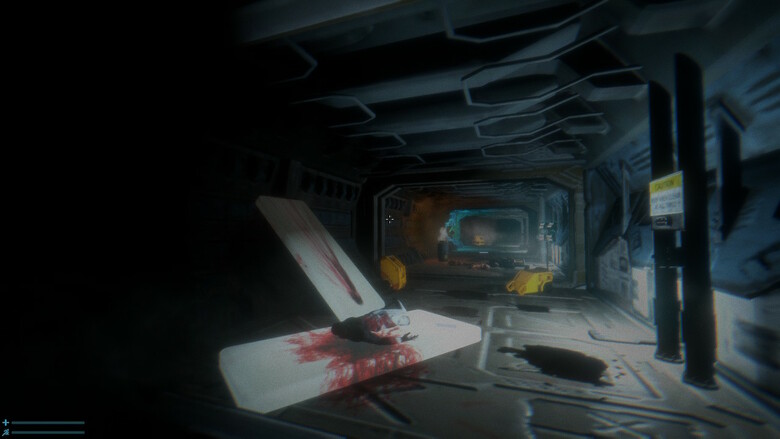 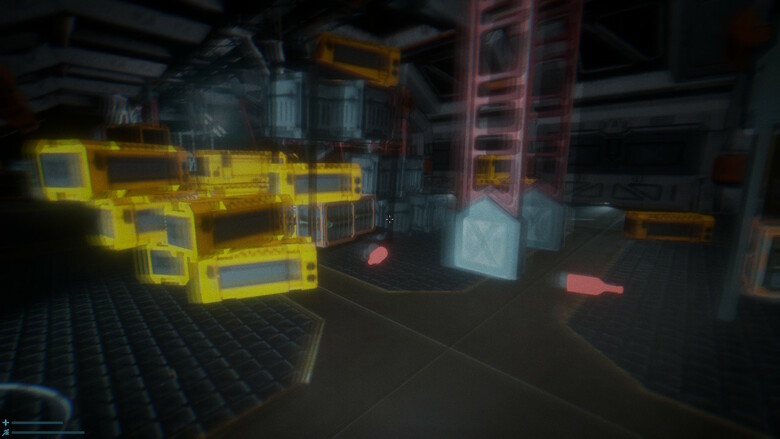 As far as gameplay goes, Syndrome is mostly fine, with no real glaring issues. It’s pretty standard fodder for the horror game genre, if a little too reliant on backtracking. This backtracking does become a nuisance, though, as it results in frequent loading screens that can take close to a minute to finish up. Much of the backtracking occurs on different floors of the ship, which means a new loading screen each time you want to change floors. Since your time on each floor can be very short, this makes the long loading sequences that much more painful.

By far, the worst example of long loading screens comes from when you die, as this inexplicably sends you back to the main menu. This causes you to sit through multiple loading screens to get to the menu, select your save, load the game back up, and then load in wherever you were after your last save. This would be a lot of loading even if the loading times were short, but with the length you suffer through in the Switch version, deaths can create extremely frustrating strings of loading.

Unfortunately, death comes fairly frequently in Syndrome, due to how powerful the enemies are. Marry this with how unresponsive and clunky the combat feels, and the result is scenarios where you’re killed extremely quickly, with little hope of surviving. I believe the game is meant to be played stealthily, but I never encountered situations where I could even attempt to utilize stealth. Even when I could sneak for a bit, enemies would always uncover my hiding spot no matter how far away I attempted to hide, forcing me into combat where I would almost certainly lose.

I hate to be so negative about a game, but frankly, I cannot offer a reason to play Syndrome in its current state. Even without the game-breaking bugs keeping me from finishing, Syndrome is incredibly unpolished, with flaws so obvious it makes me question why the game wasn’t delayed. Perhaps in the future, if patches are released to remedy progress-halting bugs, there could be some fun to be had. Even so, I sadly don’t see myself revisiting Syndrome at any point down the road.